This No-Churn Cookies and Cream Ice Cream recipe is incredibly simple, made with only four ingredients! It is deliciously creamy and packed with cookie pieces.

When the ice cream craving hits, especially during the summer months, this recipe is the answer. No-churn cookies and cream ice cream is incredibly simple to make, is made from four ingredients, and satisfies all ice cream cravings.

What is "No-Churn" Ice Cream?

No-churn ice cream is ice cream that is made without the need for an ice cream maker. It comes together with a standing or handheld mixer, a spatula, a loaf pan, and a freezer. It's just that easy!

How does it work?

This ice cream recipe is incredibly simple in preparation and process. It uses only four ingredients and comes together in about fifteen minutes. The hardest part of this recipe is waiting for the ice cream to set in the freezer!

As stated above, the process of making this no-churn ice cream could not be easier. You'll need a large bowl, a standing or handheld mixer, a spatula, and a 9-by-5-by-3-inch loaf pan.

Yes, it is just that easy!

No-churn cookies and cream ice cream is the solution for when the ice cream craving hits at home. It is so incredibly easy to make and absolutely satisfying to eat. It tastes just like classic ice cream, equally as creamy and equally as joyful to eat. With only four ingredients, there's no excuse not to make a batch of this homemade cookie and cream ice cream. Homemade ice cream has never been easier! 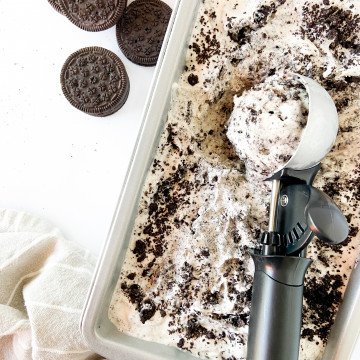 DID YOU MAKE THIS RECIPE? Please leave a star rating and review below!

Learn more about me →