I'll be honest, the "sticky" aspect of this cake was not what I was going for. But, it turned out pretty darn delicious, so I wanted to share the recipe. The brown sugar, cinnamon goodness of this Gluten-Free Sticky Crumb Cake is perfect for when those sugar cravings hit. The flavor profile is sweet and nutty with a punch of cinnamon.

This cake is gluten-free, but it is not sugar free...

The flavor of this reminds me of a sticky cinnamon bun minus the icing. It's sweet and nutty. I've been playing with gluten-free flours lately. I love almond flour for its texture and flavor, but I am hoping to experiment with other flours too. I cannot say this cake is low-carb, granted the different elements of sugar added, but it is free of gluten.

This cake would make a sweet addition to brunch or a yummy dessert enjoyed after dinner. Pair it will a glass of almond or oat milk and you are set! This Gluten-Free Sticky Crumb Cake is sticky and crumbly (hence the name), but isn't that what you want from a sweet treat? One final thing, this cake gets better with age. I enjoyed a slice of this cake even more the second day! 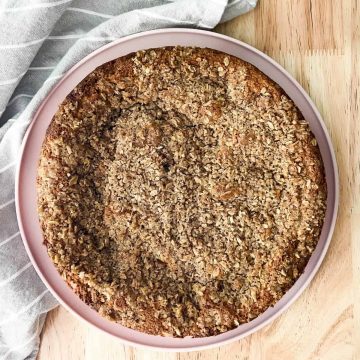 I am the recipe developer, content creator, and photographer behind Sugary Logic. Sugary Logic recipes are designed with a clear, easy concept in mind. These are all recipes that I enjoy on the regular (yes the sweets too.) I’m so happy you’re here and I hope you enjoy these recipes as much as I do.